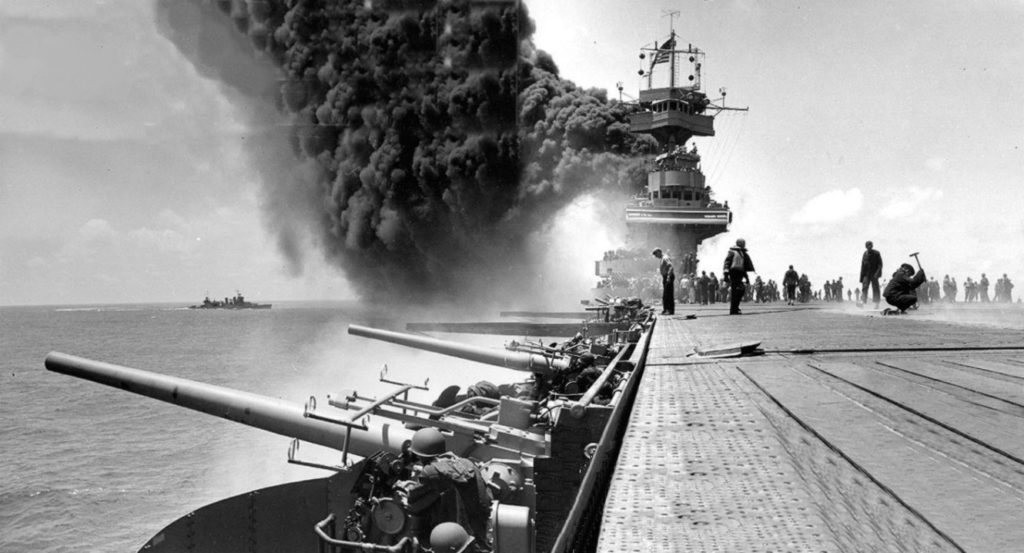 Scene on board USS Yorktown (CV-5), shortly after she was hit by three Japanese bombs -- Battle of Midway, June 1942. U.S. National Archives.

Battle of Midway - 78 Years Ago

On June 4,  1942, the Battle of Midway–one of the most decisive U.S. victories against Japan during World War II–began. During the four-day sea-and-air battle, the outnumbered U.S. Pacific Fleet succeeded in destroying four Japanese aircraft carriers while losing only one of its own, the Yorktown, to the previously invincible Japanese Navy.

Japan sought to remove the United States as a Pacific power in order to gain territory in east Asia and the southwest Pacific islands. Japan hoped to defeat the US Pacific Fleet and use Midway as a base to attack Pearl Harbor, securing dominance in the region and then forcing a negotiated peace.

So, instead of surprising the United States, Japanese forces sailed directly into a powerful US fleet, led by the aircraft carrier U.S.S. Yorktown. Damaged in the Battle of the Coral Sea, the carrier had been repaired by Pearl Harbor Navy Yard in an astounding two days in order to be ready for Midway.

When the Battle of Midway ended, Japan had lost four carriers, a cruiser and 292 aircraft, and suffered an estimated 2,500 casualties. The U.S. lost the Yorktown, the destroyer USS Hammann, 145 aircraft and suffered approximately 300 casualties.

Bowfin Museum
DID YOU KNOW?
The U.S. Submarine Service was created in 1900 and the first submarine was the USS Holland, named for the man who designed and developed it.