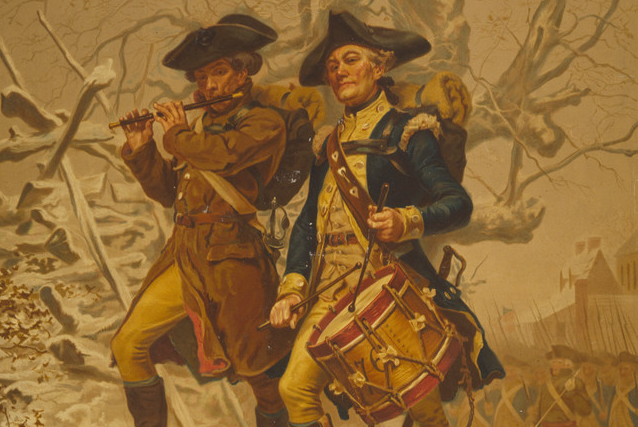 “The Continentals,” an 1875 painting by Frank Blackwell Mayer. Library of Congress photo.

In 1782 Gen. George Washington created the Badge of Military Merit to recognize heroic acts by his troops. The requirements for earning the badge were a lot different from today’s Purple Heart. Soldiers had to do something unusually heroic or perform some act that was essential to the success of the Continental Army. While that sounds more like something you’d have to do to earn the Medal of Honor, the badge was actually a cloth purple heart with the word “merit” stitched across it in white. So, in a way, both the Medal of Honor and the Purple Heart came from the Badge of Military Merit.

One thing that made the badge different was that it was the first award meant for enlisted troops. Before this, the only way to recognize heroism by an enlisted soldier was to promote him, or for a general to give him a battlefield commission.

No one knows for sure how many soldiers ever received the Badge of Military Merit, though it could be as few as three. And the book in which recipients’ names were recorded has been lost for more than 200 years.

Washington’s order was allowed to lapse after the war ended and the Purple Heart wasn’t revived until Feb. 22, 1932, on Washington’s 200th birthday. Designed by Elizabeth Will, an Army heraldic specialist, the modern medal features a profile image of Washington. Once again, the medal was awarded for meritorious service, but now soldiers could also receive it if they’d been wounded by the enemy.

At first, the Purple Heart was only available to soldiers, but in 1942 Congress changed the rules for earning the award, authorizing it only for wounds, and made it available to all services, including some civilians. Civilians who worked with the military, like Red Cross workers or war reporters, remained eligible for the award until 1997. Civilian employees of the Defense Department who are killed or wounded by an enemy now receive the Defense of Freedom Medal.

During World War 2 (but also in Korea and in Vietnam), the “Purple Heart” was often awarded on the spot, with occasional entries made into the Official Service Records, although this was more often not the case! It should be noted that, in addition to the above, a number of field commanders would sometimes engage in “bedside presentations” of the Medal. This would typically entail a local Commander or a General Officer entering a Hospital Ward with a box of Purple Hearts, pinning them on the chests or on the pillows of wounded servicemen, and then departing with no official records kept of the visit or of the awarded persons.

Posthumous awards were sent to the relatives or next-of-kin of a deceased member of the Armed Forces, who could then display the decoration in any manner desired, but were not authorized to wear it.

The next major changes to the Purple Heart occurred in February 1984, when President Ronald Reagan recognized the changing nature of war and signed Executive Order 12464.  This order announced that the Purple Heart could now be awarded to those killed or wounded as a result of an “international terrorist attack against the United States.”  Reagan also decided that the Purple Heart should be awarded to individuals killed or wounded “outside the territory of the United States” while serving “as part of a peacekeeping mission.”  As a result of Reagan’s decision, a small number of soldiers in uniform received the Purple Heart who otherwise would have been denied the medal.

Finally, the wars in Afghanistan and Iraq caused the most recent changes to the Purple Heart’s award criteria. On April 25, 2011, the Defense Department announced that the decoration now could be awarded to servicemen and women who sustained “mild traumatic brain injuries and concussive injuries” in combat.  This decision was based on the recognition that brain injuries caused by improvised explosive devices (IEDs) qualify as wounds, even though such brain injuries may be invisible.

As war evolves so too do the requirements for obtaining the Purple Heart.  For example, a recent law passed by Congress permits the award of the Purple Heart for some domestic terrorist incidents.  While today’s Purple Heart medal looks exactly the same as it did in 1932, General MacArthur would certainly be surprised to see how much the criteria for awarding it has changed.

Bowfin Museum
DID YOU KNOW?
In the spring of 1944 USS Tang (SS-306) rescued 22 airmen at one time, which was the most saved on a single patrol.