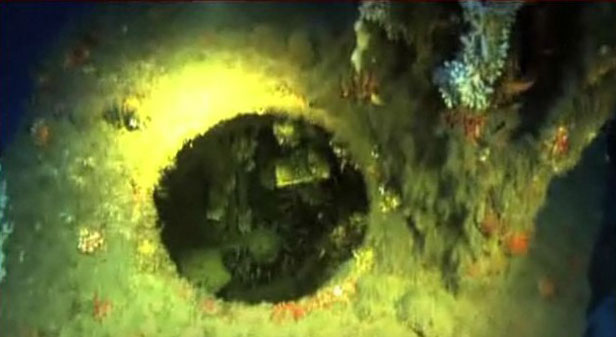 USS Flier (SS-250) was a Gato-class submarine and was last heard from on 12 August 1944 near the Balabac Strait. While on the surface the Flier struck a mine and sank in a couple minutes. Eight crew members were able to get out of the sinking sub in time, but the remaining 78 were unable. The surviving crew were later picked up by USS Redfin (SS-272).

The last surviving crew member of Flier, Ens. Al Jacobson, had never given up the search for his lost shipmates. Sadly, Jacobson passed away in 2008, but his family was determined to continue the search. The family provided notes and research to the production company YAP Films, which investigates nautical mysteries, and Jacobson’s son Steve and grandson Nelson participated in the search. Led by the father and son team of divers, Mike and Warren Fletcher, their efforts paid off in the discovery of the vessel in 330 feet of water, at approximately the same location that Al Jacobson had believed the boat was sunk.

A memorial ceremony for the men of USS Flier took place on 12-13 August 2010, at the Great Lakes Naval Memorial and Museum (GLNMM), located in Muskegon, Michigan. GLNMM is the home of the historic submarine USS Silversides (SS-236), which is of the same class and general appearance as USS Flier.

DID YOU KNOW?
The U.S. Submarine Service was created in 1900 and the first submarine was the USS Holland, named for the man who designed and developed it.