Effective Monday April 5th, 2021, the Pacific Fleet Submarine Museum will return to its pre-COVID operating hours: 7 am to 5 pm daily. Please refer to our Health & Safety Guidelines prior to visiting. Reservations are not required, but tickets may be purchased online in advance.

Please Note: Due to the unpredictable nature of the COVID-19 pandemic, this is subject to change without notice. Please monitor our website, social media posts, and e-newsletters for updates.

At USS Bowfin Submarine Museum & Park there are many different exhibits the whole family can enjoy. In addition to the submarine itself we have a submarine museum with many exciting exhibits inside, as well as many fantastic outdoor exhibits.

In an effort to expand our reach and impact, USS Bowfin Submarine Museum & Park is currently undergoing a major expansion and renovation project, which involves the temporary closure of the museum and certain other exhibits and parts of the park. The USS Bowfin itself remains open during our improvement project. The gift shop, food service, all concessions, and the lanai will remain open as well. Please visit our social media channels for the latest updates on progress in our museum and park!

The USS Bowfin Bell was missing after her move between San Diego, California, and Seattle, Washington. In 1996 the bell resurfaced and was offered to the museum. Three naval reservists in California volunteered to verify its authenticity and within months, the Bowfin and her bell were reunited.

Another exhibit is Bowfin’s second battle flag, which was stored in Bowfin crew member Jack Updegraff’s parents’ attic and forgotten about for almost 50 years! It was rediscovered and donated to Bowfin Museum’s collection just in time for the crew’s reunion on the boat.

Other exhibits include a Bowfin launching cachet and a Purple Heart that was bestowed upon crew member Reid Lee, the only Bowfin casualty of war. Lee received shrapnel wounds during a surface engagement on the seventh patrol. The Purple Heart, a decoration instituted by Gen. George Washington, is named after the only type of wood capable of withstanding the constant stress of repeated firing.

Hanging from the ceiling beams in the World War II section of the museum are replicas of submarine battleflags of many submarines that fought in the Pacific. Because these flags are unofficial and were individually designed by the crewmen of the different boats, the creativity, style, and design of each varies. The one element common to all of them is the pride of the men who served. Many of the flags were made with materials that were found on the boats and sewn by the members of the crew.

Generally, a submarine’s battleflag included a mascot in caricature, a record of how many enemy ships were sunk and important commendations awarded to the boat (the Presidential Unit Citation, for example). Damaged ships, airmen rescued, mines laid and other special missions were also indicated on the flags.

The Poseidon C-3 missile, with all of its electronics, hydraulics and propulsion elements still intact, is on display for visitors to examine at USS Bowfin Submarine Museum & Park.

This massive cutaway mock-up weighs 12,000 pounds, is 34 feet long and is 74 inches in diameter. The C-3 strategic missile was capable of being launched from a submerged Fleet Ballistic Missile submarine. The first submarine to carry and launch a C-3 missile was USS James Madison (SSBN-627) in August 1970. The missile was donated to the Museum by the U.S. Navy through Lockheed Missile and Space Company, which manufactured the C-3 missiles for the Navy. 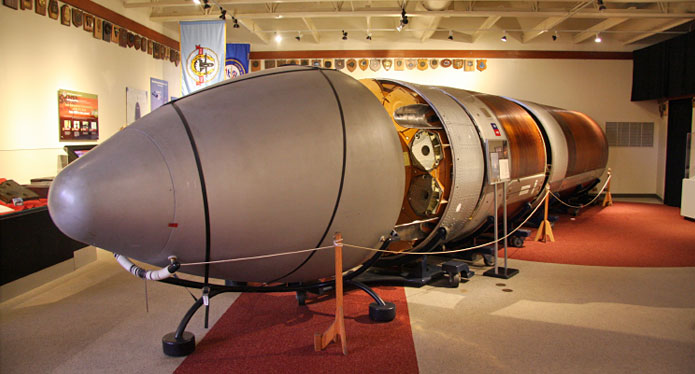 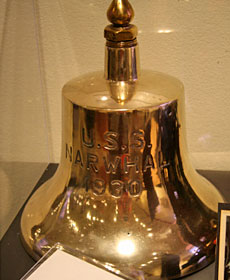 We have many great exhibits for everyone to enjoy. Here are just some of the artifacts we have on display. 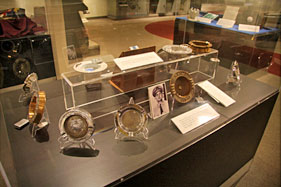 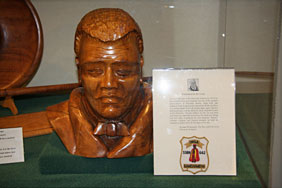 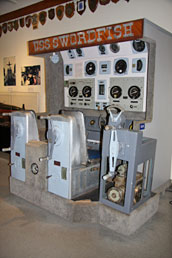 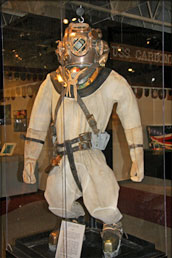 DID YOU KNOW?
The H.L. Hunley was not a United States Navy Submarine as many believe. It actually belonged to the Confederate States of America and was used during the Civil War.