USS Bowfin (SS-287) is a fleet attack submarine that fought in the Pacific during WWII, and helped to make famous the term, “Silent Service.” Bowfin was launched on 7 December 1942, exactly one year after the attack on Pearl Harbor. She was nicknamed the Pearl Harbor Avenger, so it is fitting that her permanent home is at Pearl Harbor, Hawai’i.

In World War II USS Bowfin conducted nine war patrols between 1943 and 1945. War patrols of WWII are similar to what we think of as deployments today. They were periods of about two months where a submarine would patrol a designated region of ocean for Japanese ships or boats. Bowfin served in the Pacific and spent most of her patrols in the South China Sea, Celebes Sea, off the East coast of Japan, and into the Sea of Japan.

The following links provide more information on each unique patrol: 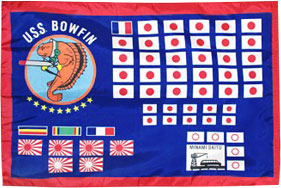 DID YOU KNOW?
The Turtle was a submersible during the American Revolution that attempted to attach explosives to a British vessel in New York Harbor – it was not successful but laid the framework for future use of submersibles in hostile conflicts.